Medical Errors: A Matter of Life and Death 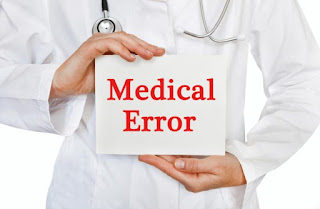 I want to note here, that if I did not get this call, I would have had unnecessary Mohs Surgery. I was glad that the Mohs Surgery office takes the time to check to see that the people coming in for testing are appropriate and in need of the surgery. This is one example of having a system in place to check reports and confirm patients are appropriate prior to the procedure that can prevent a medical error.

I did get a call from the first dermatology office, but not from the doctor, but from Steve. Steve explained that the doctor was busy and asked him to call me to tell me that the last path report did show clear margins, so I did not need to have the Mohs surgery and to follow-up in 3 months! I asked Steve to send me the path report that showed the clear margins so that I could have for my records.
Once I got the report, I read it over and over to be sure I was reading it correctly. I also called the 2nd dermatologist to give her the information, and she said she would cancel the appointment with the Mohs physician at the University of Miami and would see me in three months for a checkup.  I breathed a sigh of relief and said a little prayer as I was grateful that everything was ok.

What I learned from this experience

The key is to learn from our mistakes and find ways to prevent them from happening again. All healthcare settings and organizations need to promote a culture of safety so everyone feels safe to report problems so they can be addressed.

As stated at the beginning of this post, the bottom line for everyone to remember is that healthcare is delivered by human beings and we all can make a mistake. Everyone needs to remain vigilant to identify, correct and report errors when they occur so quality improvement initiatives be considered and put into place.
Thank you for reading Nurse Advocate. If you have an example of a medical error you experienced, please share your experience in the comment section or email me at [email protected]
If you are a patient, stay alert and stay safe!  If you are a healthcare professional – please double check your work and don’t be afraid to report an error so it can be addressed. It is important!
Have a good week.