Trust and Respect; Essential Ingredients for a Good Doctor/Patient Relationship 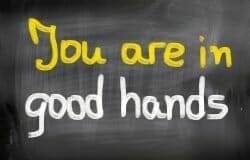 This week I had a good experience while visiting a hematologist with a patient. Here is the story. Mary is a 94-year-old female who was in excellent health until she expeiened a Myocardial Infarction a few months ago. Recently, she  has been having trouble maintaining a normal hemoglobin and hematocrit. She has been followed by a Gastroenterologist and has received several transfusions due to low hemoglobin and hematocrit. As a result, she has referred to a hematologist for a consultation to investigate her condition and recommend a plan of care.

Before the visit, the office had mailed the patient an assessment form so she could fill it out before the appointment. As she was shaky, I helped her complete the form when I visited her to introduce myself and what my role would be.

On the appointed day, we arrived at the Hematologist’s office and was greeted by the front desk receptionist. The receptionist was very friendly and efficient. Once done, we were called in by the lab technician, who brought the patient back to draw her blood. This was done, and then a medical technician took the patient back to the room where she did her vital signs. As we waited for the Doctor, we talked about what she hoped to get out of the appointment.

A few minutes later, the Doctor came into the room and greeted the patient and me. He asked the patient how she was doing. Once she finished talking, the Doctor explained he had reviewed her medical records from her last hospitalization, the various scans, and lab studies she had done over the past few weeks.

He said he spent time studying her file and wanted to lay out a plan that he felt would help her. He explained the plan calmly and asked along the way if the patient had any questions. The patient did have a few questions which she asked, and he answered in a calm and informative manner.

As I listened to the patient (a 94-year-old woman) communicate with the Doctor, I smiled to myself. She was sharp, and she was being an active patient. She expressed her views well.

She was able to follow what the Doctor was saying. When she did not understand something, she politely asked him to repeat what he said to clarify the point he was making.

I asked a few questions that the patient and I had talked about when we were planning the visit. The Doctor answered my questions so that we both understood what he was saying.

It was a good visit, and the patient said she felt good as she left the office. She said she was glad that I had accompanied her and that the plan of care the Doctor laid out seemed reasonable to her. She said she was feeling hopeful.

Looking back on this appointment, I have to say this was one of the best visits I had been on with a patient/client in a long time. The Doctor was prepared, as he said, ‘I did my homework.’ He had a good picture of the patient and from his review, put together a plan of care that he explained clearly.

I don’t usually leave a doctor’s office saying I would go to this Doctor if I needed a hematologist. I did leave this office with a good feeling. He instilled trust and respect, which is all we can ask of our healthcare team.

Have you had a good visit with a doctor recently? If so, please share your experience in the comment section below. Have a good week!